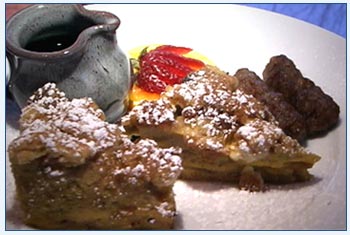 Directions:
Spray a 10 x 15 inch baking pan with nonstick cooking spray. Remove crusts from bread slices and cut into 3/4 inch cubes. Place half the bread cubes in the baking dish and sprinkle with half the raisins, then add the remaining bread cubes and top with second half of the raisins.

Cover the pan with a sheet of aluminum foil which has been sprayed with nonstick coating and refrigerate overnight. In the morning, bake the dish approximately 60-75 minutes at 375 degrees F. until french toast has puffed up and custard is set. Remove foil covering, cut into squares or wedges, and serve with maple syrup.